Where the epic ends, Nityapurana begins. Writer and director Masum Reza’s depiction of the aftermath of the epic Mahabharata is an impeccable creation. Last evening, the audience witnessed the 75th exhibition of Desh Natok’s timeless production– Nityapurana at Bangladesh Shilpakala Academy.
A house-full audience blissfully watched a variation of the Nityapurana, which was called Bohu Borne Ek Draupadi. Four actors in the role of Draupadi appeared on the same stage. The show was dedicated to their long term member, the late Dilip Chakraborty.
The production was first staged in 2001, and was elevated to a different level by bold and energetic Dilip Chakraborty through his unparalleled portrayal of Ekalavya. The untimely demise of the actor left the troupe baffled, but they knew that the show must go on. The role is now played by Mamun Chowdhury Ripon.
The production and the characters changed over time. The role of Draupadi was played by Shirin Khan Moni, Naznin Hasan Chumki and Bonna Mirza at different points over the years, and will now be played by Sushama Sarker.
The four actors, one by one, portrayed the untold story of Draupadi. The transition of actors looked seamless, and Draupadi had a distinct character. The performance of the actors left the audience’s eyes glued to the stage.
“I say it is a social responsibility of the audience to come and watch good theatre,” says the Director Masum Reza, who has been tirelessly working to propagate the art of theatre. The team received felicitation from Theatre Factory by Alok Basu on stage after the show.
-Priyanka Chowdhury
Source: thedailystar, 19 August 2018 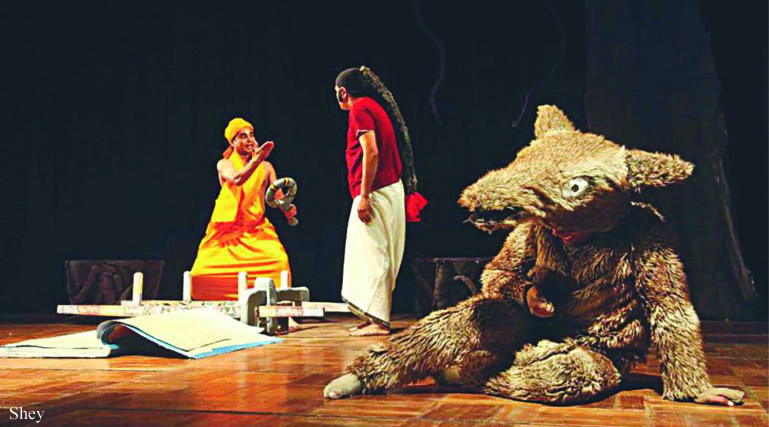